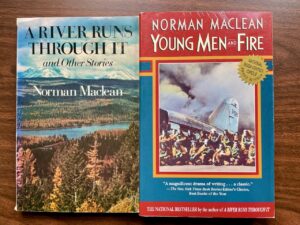 New on on my website WritingtheNorthwest.com: “Stories with Trees in Them: Norman Maclean and the Real Northwest.”

An author who wrote only two books, both when he was in his 70s, just might be the quintessential Northwest writer.

I hope you’ll take a moment to read this honest and moving piece by Robin Bartlett, a writer I worked with last year at Collegeville: Memento Mori.

Here’s what Robin wrote when she posted it on Facebook today:

I am a preacher and not a writer, but today my writing is published in a magazine. The writing teacher that I worked with at Collegeville Institute, Michael N. McGregor, really pushed me to stop sermonating and start sharing more of myself. As a result, this essay is much more personal than what I typically preach, so it feels a little bit like “bleeding in public.” But here it is, in public anyway. Thanks, Notre Dame magazine, for giving me this forum. And thanks, Michael, for believing in me. I was pleased to see this important reminder on this young man’s back the other day. It’s a shame, though, that we have to be reminded to be kind to those who might struggle more than we have to. Maybe we should all wear signs that say simply: “Human being. Be kind.” Between rain showers today, I did a very Northwest thing: scraped moss off this roof. I was halfway through when my neighbor came along, looked from one half to the other and said, “Moss–no mas.” Then she walked on. My mother on her wedding day. Today would have been her 100th birthday. She’s always alive in my