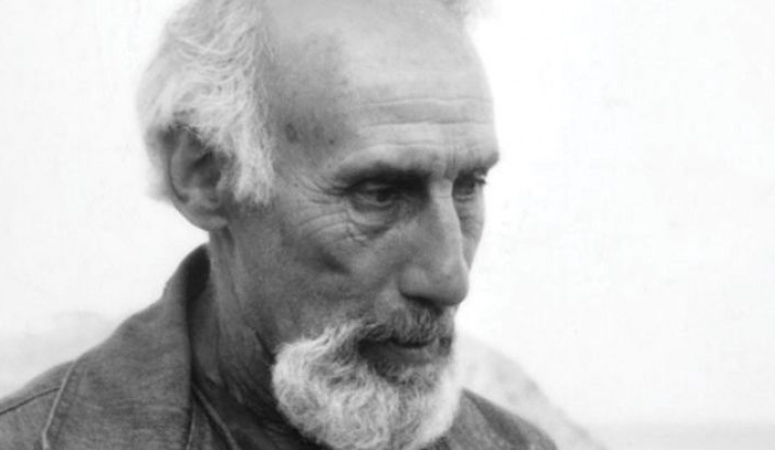 Review by Lawrence Cunningham, John O’Brien professor of Theology (Emeritus) at the University of Notre Dame
(from the February 12, 2016, issue of  Commonweal Magazine)

Robert Lax (1915-2000) is today best known in this country as Thomas Merton’s closest friend. Having met when they were both students at Columbia University, the two exchanged letters until Merton’s death in 1968. It is the purpose of Michael N. McGregor’s new biography of Lax to move him out from under the shadow of Merton’s powerful personality and give him his own place in the sun. This is not an easy thing for an American biography to do, both because Lax spent so much of his adult life outside the United Sates and because of his commitment as a poet to seeking the purest and sparest language possible, a commitment that makes his hermetic poems a challenge for many readers. While Lax enjoyed a certain measure of fame in Europe during his lifetime, it was only late in his life that his writings found a place in the American literary scene.

After Lax graduated from Columbia in 1938, he got off to a promising start. He landed jobs at the New Yorker and Time, and even spent some time as a scriptwriter in Hollywood. But a lifelong restlessness led him away from the well-beaten path of literary success. He traveled with a circus, lived for a short while in Paris and then in a poor neighborhood of Marseilles. He spent some time at a religious retreat near the shrine of La Sallette in France, and eventually settled—if that’s the right word—on the Greek island of Patmos. Finally, old age and illness brought him back to his upstate hometown of Olean, New York, where he died in 2000.

Born into a largely nonobservant Jewish family, Lax was baptized a Catholic in 1943. Ed Rice, who was Merton’s godfather, was also Lax’s. In the early 1950s, Rice founded Jubilee magazine, for which Lax served as a “roving editor” from Europe. That job was one of a number of threads that kept him somewhat tied to the American scene. He also kept up a correspondence with Mark Van Doren, the legendary Columbia professor, and thanks to his friendship with the graphic designer Emil Antonucci (who did a lot of work for Commonweal over the years), Lax’s great long poem The Circus of the Sun was published in this country. During all his years abroad, he wrote constantly. His poetry became gradually more pared-down, more minimalist. While he found sympathetic publishers in Europe, he remained little known and little published in this country, garnishing a certain reputation among better-known poets such as John Berryman (another classmate at Columbia) and John Ashbury.

McGregor got to know Lax by accident on a trip to Greece when someone on Patmos told him of the greatly admired American who lived on the island. McGregor sought him out and over the years they became friends. In fact, a fair amount of this biography frames itself around McGregor’s many visits to Patmos and the time he spent with Lax doing the things Lax loved most: walking around the island, swimming, and spending time in his modest home drinking tea, discussing books, sharing poems, and at times, sitting quietly. Toward the end of his life, Lax depended on McGregor to assist him with his papers and to help him return to upstate New York before the end of his life. Lax’s way of life, which McGregor observed in Patmos, had been established decades before: “living simply among those at the bottom of society, watching and writing down his observations, offering peace and whatever else he could to those in spiritual or physical need.” There was something almost monastic about it; it was in some ways similar to the life that Merton lived. Not surprisingly, Lax was, like Merton, a lifelong pacifist.

The title of this book derives from some lines Lax once wrote, obviously under the influence of the Thomism he learned during his Columbia days. God is pure act with no potency within Him, while everything else in the universe is in potential: on its way to pure act and thus on its way to unity with God. To really see something is to grasp that it is oriented toward pure act—which is to say, toward God. Perceptive critics were able to grasp this fundamental philosophical orientation in Lax’s austerely minimalist poetry. Mark Van Doren said that Lax expressed the “purity of the object and reverence in the beholder.”

Both Lax’s way of living and his poetics raise the question of his religious orientation. Lax never rejected his Jewishness after his entrance into the Catholic Church. He continued reading deeply in Jewish sources and was a close reader of Martin Buber. McGregor cites a long journal entry from late in Lax’s life where he writes that it is important to find the “right” religion and the right culture, but even more important “is the progress you make—the progress you find you can make—once you have found it.” The end, however, is to get beyond being a “good” Jew or Catholic in order to become a “contemplative, yes to be a mystic, yes.” In that context, Lax loved the line of Teilhard de Chardin: “Everything that rises must converge.”

McGregor wants to see Lax in his own right, and, true to that aim, he has written an intellectual biography that is as full and fair as one could expect. As a longtime reader of Lax, I learned a great deal from this finely researched book. It is not perfect: it is stronger on Lax the poet and essayist than on Lax the spiritual writer. On the latter topic one should consult Steve Georgiou’s The Way of the Dreamcatcher (2002). But Lax the poet deserves the attention he gets here, and the poetry, now mostly overlooked, is a good way into Lax’s mysticism.