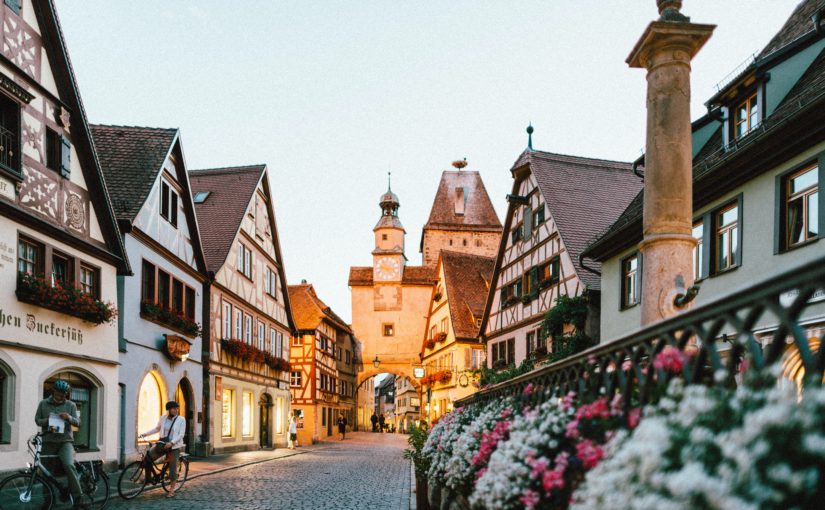 In order to insure the first German edition of Robert Lax’s 33 Poems would be as accurate as possible, I recently helped the translator and publisher, Thorsten Scheu, with his translation. My contribution consisted primarily of matching the German to the English and, with my intimate knowledge of Lax’s work (and improving knowledge of German), suggesting where the translation might be improved. It was a small part of the overall work, but it was enough for Thorsten to list me in the book as an editor, which delighted me.

My relationship to German is long and spotty. My grandmother’s parents were German and she grew up speaking German in the U. S., but I don’t remember her ever using more than an occasional German word in my presence. My first real encounter with the language was in grade school. I went to a Lutheran school with German roots and the only foreign language we could study there was German. If I remember correctly, I was forced to learn it from the 4th through the 8th grade.

I didn’t love the language, possibly because of how it was taught, but when I went to high school I took two more years of it to fulfill a language requirement and then did the same thing in college. One reason I never embraced it more fully was I never thought I’d be in a position to use it.

But then, just five years out of college, I started leading tours in Europe, including in Germany, and, for the next decade or so, found myself needing to use German every year. To my surprise, I started to like it and I did some studying of it on my own.

During those same years, I met and then married my wife Sylvia. Her mother was German and Sylvia herself spoke German exclusively for the first five or six years of her life. It was a sad day for her mother when Sylvia told her she had to be careful because this new man in her life knew their secret language. Being with Sylvia and her mother improved my German immensely.

But even then, I would never have had the confidence I’d need to help with a translation from English to German if I hadn’t decided in April of 2020 to take on a “pandemic project.” While clearing books from a shelf, I came across a Bible written in “heutigem Deutsch”: contemporary German. Sylvia told me a friend had given it to her years before. Since I had never read the entire Bible and I’d already thought about spending some of my pandemic time furthering my knowledge of one language or another, I decided to kill two birds with one stone.

To keep my new task from seeming onerous, I told myself I didn’t have to read every day but I had to average a chapter a day. I struggled a bit at first but eventually I enjoyed the work more and more, and two weeks ago I celebrated a full year of reading the Bible in German. At that point, I had read 40% of it. Which means I still have a year and a half to go!

When I first started reading the German Bible, I had to look up words in almost every sentence, but now I can cruise through several sentences at a stretch without looking anything up. It was that growth in my knowledge of the language that gave me the confidence to attempt translation work.

One interesting byproduct of my German Bible reading and translation work was I found more in Lax’s poems than I knew was there. Because translating slowed me down, I paid more attention to every word and saw how very carefully Lax had chosen each one. Because my German teacher was the Bible, I saw how strongly Lax’s work was inspired by Biblical rhythms and language too.

These good experiences with a language I once disliked have me thinking about maybe someday trying my hand at translating a German work into English.

Meanwhile, though, I have the rest of that Bible to read.

33 Gedichte (33 Poems) by Robert Lax (trans. by Thorsten Scheu) is scheduled to be published in a limited edition of 100 copies by Sprachlichter Verlag in June 2020.

The image at the top of this post comes from  Roman Kraft on Unsplash.