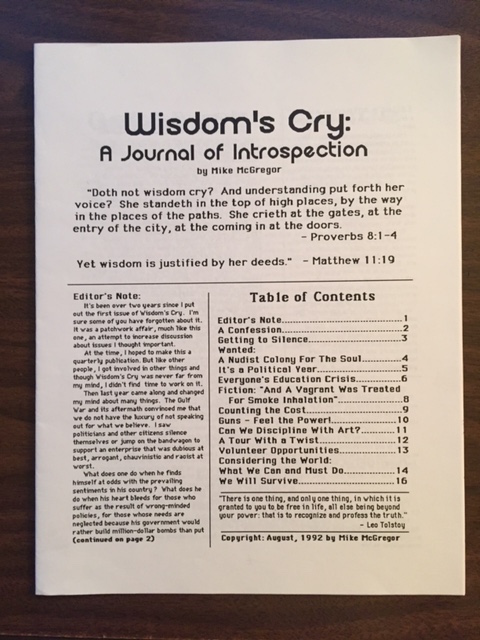 In 1992, I was living in Seattle and running a small European tour company I had established three years before.  In addition to leading my own tours, I guided for Rick Steves, with whom I’d been working for seven years. I was ready to move away from travel, though–to return to my first love, writing, or get more involved in politics, maybe even run for office.  Two years before, I had developed a small magazine I called Wisdom’s Cry, writing everything in it myself and sending it to friends to stimulate discussion about issues I thought were important.  I was tired of get-togethers at which people talked only about trivial things when larger things were happening in our country and our world.

I had intended to make Wisdom’s Cry a regular effort, sending copies to friends every three months or so, but touring and running a business and everything else in my life interfered.  Then came the Gulf War buildup, followed by the war itself and I found myself baffled by the country’s zealous support of what seemed to me an ill-advised venture.  When the war had ended and the next election cycle was in full swing, I was more anxious than ever to stimulate discussion among my friends and my thoughts returned to Wisdom’s Cry.  By then, I was volunteering as the newsletter editor for my local Democratic district, the Thundering 36th as we called ourselves.  I was a precinct committee officer too  (the only elective office I’ve ever held).  But I wanted to do more.  So I put out a second issue.

While looking for something else yesterday, I found that second issue.  When I read through it, it seemed to me that the writing in it was level-headed as well as passionate and sometimes creative.  Having mostly neglected this website for months, I thought putting some of the articles I wrote for that issue on here might help me jump-start it.  If nothing else, they show a way of approaching important issues that seems more reasonable (at least to me) than how we’ve been approaching them lately in this fractious and extremely partisan time.

I should note that only some of the articles in that issue seem obviously political–dealing with education, gun violence or getting involved in elections, for example–but all of them, even the more creative ones dealing with silence or art, are political in the deepest sense, for they are about our collective decisions about how we want to live as a society.

Maybe something I wrote in that issue, or just the decision to put it together and send it out, will inspire someone who stumbles upon this website to do more than they’ve done before to help better this country and world–even put out a magazine of their own.

To get things started, here’s my editor’s note from that issue:

“It’s been over two years since I put out the first issue of Wisdom’s Cry.  I’m sure some of you have forgotten about it.  It was a patchwork affair, much like this one, an attempt to increase discussion about issues I thought important.

“At the time, I hoped to make this a quarterly publication.  But like other people, I got involved in other things and though Wisdom’s Cry was never far form my mind, I didn’t find the time to work on it.

“Then last year came along and changed my mind about many things.  The Gulf War and its aftermath convinced me that we do not have the luxury of not speaking out for what we believe.  I saw politicians and other citizens silence themselves or jump on the bandwagon to support an enterprise that was dubious at best, arrogant, chauvinistic, and racist at worst.

“What does one do when he finds himself at odds with the prevailing sentiments in his country?   What does he do when his heart bleeds for those who suffer as the result of wrong-minded policies, for those whose needs are neglected because his government would rather build million-dollar bombs than put a few dollars into education or health care?

“He has three options: 1. He joins in, checking his conscience at the door.  2. He packs his things and retreats to an isolated place where he pursues his ideas on his own.  3. He jumps into the fray and does what he can to change attitudes and influence priorities.

“For me, the first of the three was never an option and though I thought about the second, the third was the only truly responsible course.

“So Wisdom’s Cry is back.  As before, it is not intended to be the final word on issues, but rather a call to discussion, to concerned consideration, and, finally to action.

“My hope is that every one of you will talk with me about issues that matter and that my feeble scribblings will prompt you to talk to those around you at home, at the office, at church.

“We are the people who can change this society’s course for the better but first we must overcome our fear of speaking out.  We must form beliefs and state them and do what we can to make this country and this world a more humane, more caring, more equitable and hopeful place to live.”