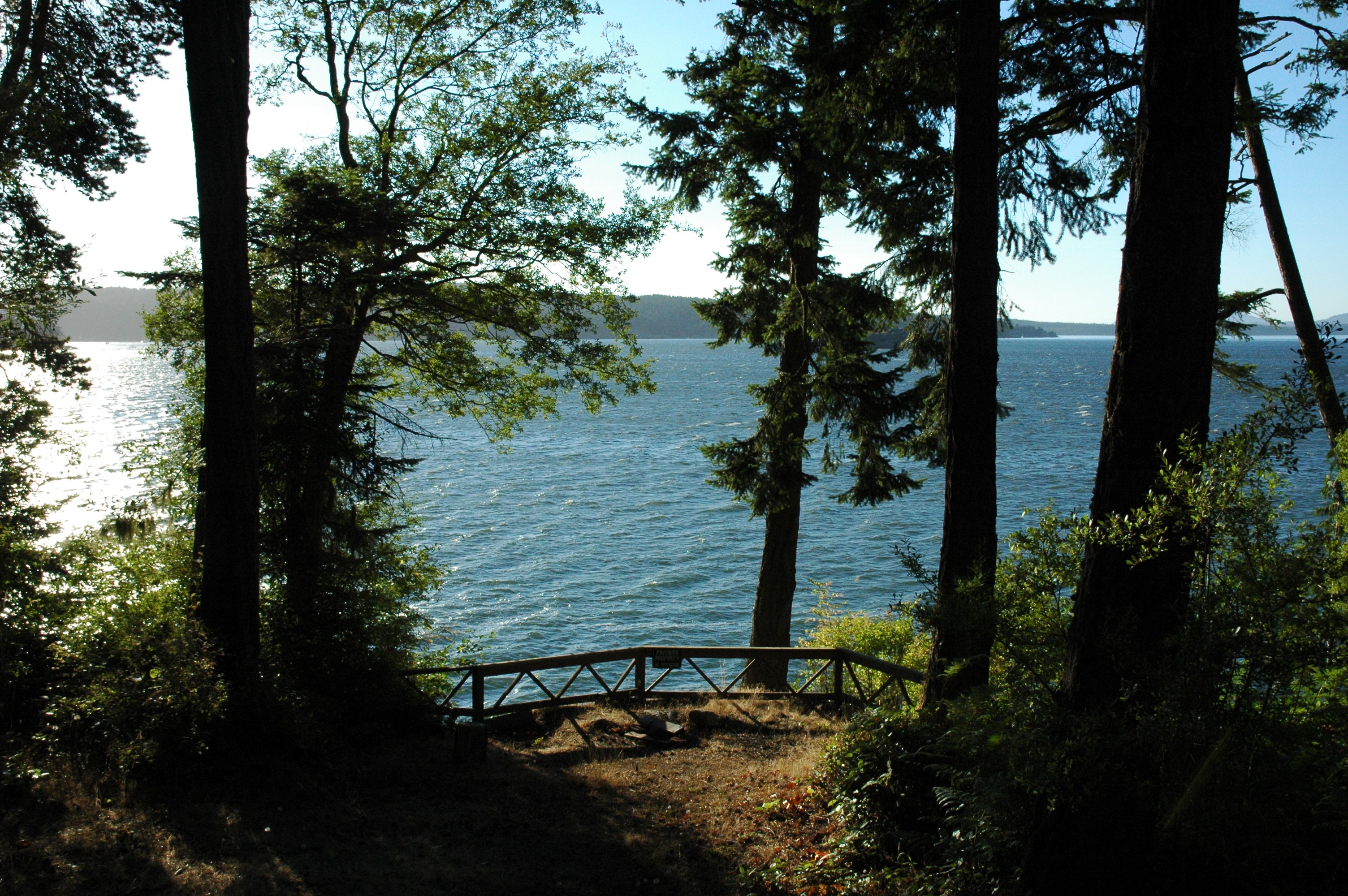 In 2006, Sylvia and I decided to spend my first sabbatical on a triangle of waterfront land her parents had purchased in the 1960s.  The land lay on the south end of Lopez Island, one of the San Juan Islands in Washington State.  It had two small cabins on it, neither of which had ever been lived in for more than a few summer weeks.  There were other cabins and even houses nearby, but almost no one stayed on or even visited that part of the island in the off-season.  (When we told one permanent resident that we would be staying through the winter, he said, “Now there will be three lights on the bay.”  It’s a BIG bay.)  Our plan was that we would sleep (and Sylvia would work) in the larger cabin (about 600 square feet) and I would do my writing in the smaller one (maybe 400 sq. ft.),  a former tent platform that had been walled in.

We moved up in June with high hopes and clear intentions, but almost as soon as we had settled in, things took an unexpected turn.  We learned the truth in John Lennon’s words, “Life is what happens to you while you’re busy making other plans.”

I’ve started writing a memoir based on journal entries I made during that sabbatical year: a recording of life as it happened to us despite our well-intentioned plans.  Over the next weeks and maybe months, I plan to post short excerpts from those journal entries as I work on my book.  To kick things off, here’s a portion of the first entry I made on the island that year, on July 24:

“We are up here for good at last, and it is a gorgeous day.  No clouds, just sun on slightly ruffled water.  The air is still, the only sounds the cries of seagulls and the putt-putt-putt of a single boat.  My allergies lie dormant.  I slept amazingly well.  For half an hour before getting up I lay half-awake in a blissful state.  I foresee a sweet time ahead.

“What I crave now is quiet, inside and out.  I am in the perfect place for me now.  Other people may not understand that.  Monks would.  Some of them anyway.  Bob [Lax] would.  When you are ready for it, nothing is a greater gift than quiet.  Silence.  To reach that state of readiness, though, you must become vulnerable.  Easily wounded.  You must pass through a period of withdrawal that may include irritation, psychic pain, worry and even fear.  I know my soul isn’t settled yet.  I am not yet like a baby quieted at its mother’s breast, as the psalm suggests.  I am close, though.  I desire quiet—and to be quiet—more than anything.  I am still enough to pause as I reach for a drink and admire the beauty of a glass of water in the morning sun.

“In this quiet, I seek to be—to become—peaceful, a man of peace.  I seek peace in a way and to a depth I haven’t in a long time.  I’m not sure I was capable of it before but I feel capable now.  I am a thirsty deer thrusting my head toward the still pond.

“While I’m up here I want to lose my anger, my impatience, my frustration.  I want to establish reservoirs of love, peacefulness and good will.  I want to rid myself of small thoughts about my career and shift back to thinking about the needs of the poor and suffering in this world.  I want to read and write and enjoy the bounty of nature.”